Technology to get oxygen and fuel from salt water on Mars

Scientists develop an electrolysis system that allows the extraction of oxygen and hydrogen from the subglacial lakes on the red planet. 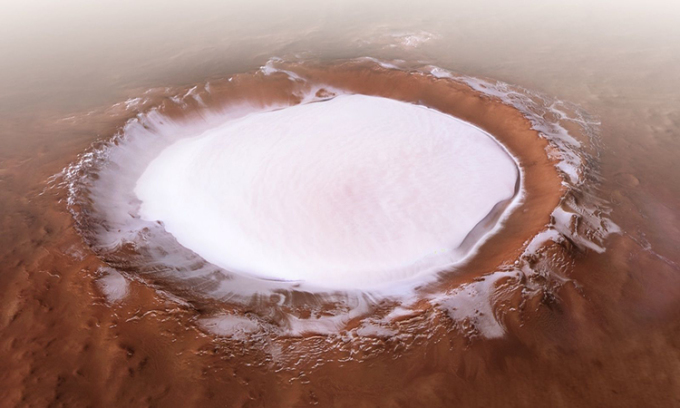 Underground lakes may be a source of oxygen that will sustain life on Mars in the future. Photo: ESA .

Mars is very cold! The water here, if not frozen, is almost certainly filled with salt because the salt reduces the freezing temperature of the water. Salt water cannot drink but can electrolyze, producing oxygen (for breathing) and hydrogen (as fuel).

Current saltwater electrolysis methods require salt removal, a complex and expensive undertaking, especially in harsh environments like Mars. However, in a new study published in the Proceedings of the National Academy of Sciences on November 30, engineers from the University of Washington said that they had successfully developed a new, simple and less costly, allowing the direct extraction of oxygen and hydrogen from salt water.

"Our water electrolyte combines a pyrochlore ruthenate anode developed by the team with a Pt / C cathode (platinum over carbon). Careful design and unique anode allow the system to operate without need to heat or filter the water, "said Professor Vijay Ramani, lead author of the study.

The Mars Express's earlier exploration missions, operated by the European Space Agency, have revealed some underground lakes on Mars have the presence of magnesium perchlorate. New research shows that this impurity not only prevents water from freezing, but also improves the efficiency of the electrolytic system by reducing resistance.

Tests in simulating the atmosphere on Mars show that Ramani's system can produce 25 times more oxygen than NASA's On-Site Oxygen Resource (MOXIE) Experiment using NASA use the same amount of electricity. Besides, it also produces hydrogen, which can be used as fuel for astronauts flying back to Earth, while MOXIE only produces oxygen from carbon dioxide in the air.

The new saltwater electrolysis system is not only useful for future Mars missions, but also applicable on Earth, allowing the ocean to be turned into a source of oxygen and fuel, the team stressed.