HA NOI - thought that if only giving gifts, the orphans' future would not change anything, Ms. Dung set up a Vong Vong fund to sponsor and sponsor them to study until adulthood.

One afternoon eight years ago, Ms. Vu Thi Dung (then 36 years old), accompanied by a charitable group, visited an orphanage in the suburbs of Hanoi. Seeing the children sitting, sad faces waiting to receive gifts, she felt "something is wrong". "Where will these children be in the future?", Dung blurted out.

On the way home, she said to her teammates: "I am not doing this kind of volunteering anymore" and presented the idea of ​​"helping the children to have a future, not to wait for the goodness of others". . This woman wants to set up a monthly orphanage support fund until she turns 18.

Everyone nodded in agreement and the Khat Vong fund was born shortly after with the founder Vu Thi Dung and four companions. Every month, they contribute an arbitrary amount to maintain the fund's operation. 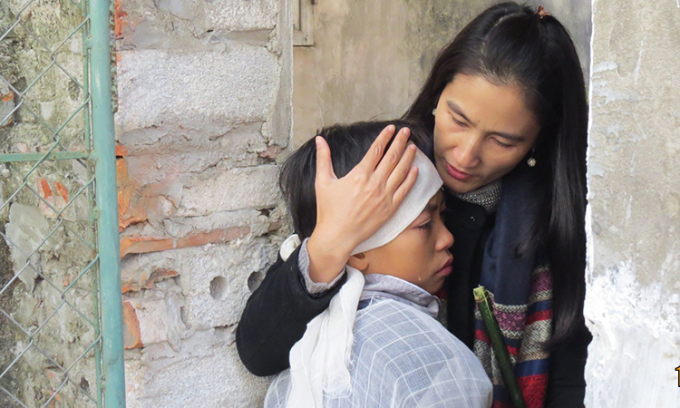 From the early days, Dung's Aspiration Fund faced skepticism and even objections from family and friends. When he told her husband, he showed no interest, and her mother bluntly scolded her "hugging straw".

Some of her friends refused to participate or contribute with the argument "What are the children that are related to me and must love and take care of", "Many orphans are ungrateful and spoiled. so people ".

Mobilized a few dozen people, after three months, she only had two more companions, one of whom was the former boss, the other was her daughter's teacher.

The first "children" was sponsored and nurtured by Aspiration, including 15 children in many different provinces.

Vien Thuong was the first girl to receive support, living with an illiterate mother in a 6 square meter thatched house, lying on a sand dune in Quang Xuong, Thanh Hoa. The day when Dung found her home, Thuong ran to the back to find a half-broken plastic chair with a nylon rope to invite guests. In the midst of the hot 40 degree heat of Central Vietnam, the house does not have a fan.

On the same trip, Ms. Dung also received three orphans who lived with her grandmother in the neighboring commune. In the house of level 4, the grandchildren and grandchildren live through the day. The oldest brother in 7th grade is shy, almost depressed after his father's death. 11-year-old youngest sister, lost her mother when she was still red. Slightly stared at the stranger, her gaze and figure concealed a speechless sadness and guilt.

In addition to being supported with tuition fees of 400,000 - 500,000 VND per month, the children also received visits for health, study ... from Ms. Dung's daily call. For the seniors, this woman sometimes comes home to urge her studies, check her school work like a mother returning from work.

In the first two years, Dung alone "hugged" a mountain of work because the number of students receiving support from Khat Vong increased. Being a human resources director, she is reeling from work all day. Everyday, she starts working from 6am to late at night, sometimes until 1-2pm at night.

From 49 kg she reduced to 43 kg and fainted several times due to exhaustion. Doctors warn that if you do not reduce the load, your health will be difficult to recover. 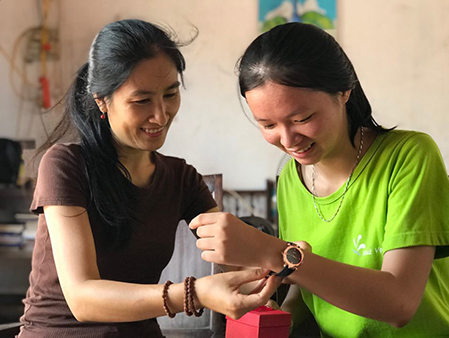 In July 2015, Dung intends to quit one of two current jobs: One is a human resources director, the other is Khat Vong fund. Sharing her plan with her husband, she only received the advice: "Think carefully, don't be impulsive, volunteering is not as simple as I think it is." Most of the cost of the fund at this time is also out of pocket, if you quit your job, where do you get the money? "But if I give up Aspiration, what will the children be like?", Dung questioned. After many days of thinking, she decided to choose Aspiration because the future of the children was entrusted to her.

Information "the director of human resources leaving to take care of orphans" was shared by Dung's friends. Close friends admonished her not to move "away" because she thought she was not normal. "I do not force people to believe immediately because every" seed "needs constant care and nurture. Therefore, we must wait enough time for everyone to see the results", she recalls.

After quitting, Dung recruited more collaborators to take care of the unloving children. Up to now, the fund has had 70 volunteers accompanying and motivating nearly 300 children, all voluntarily.

Ms. Dao Le Mai Huong (Hanoi), a former employee, also a companion in the early days of the establishment of the Hunger Fund said: "Do not look at Ms. Dung and think that she cannot do it. This woman is also full of loving energy ". Ms. Nguyen Thi Diem Hanh, another companion, said that the most impressive thing is that Ms. Dung can clearly remember each situation and understand the temperament of nearly 300 young people in Khat Vong. "Something that my companion always feels respectful," she said.

When Khat Vong turned 3 years old, a summer camp was held in Hanoi to welcome 50 "children" to reunite. This is also the first time Dung's husband witnessed the happiness and tears of the orphans. They sing, dance, act, and show affection, something that they have never had a chance to do before. "I think the path you choose is right. Make it your life goal," her husband told her after the summer camp was over.

After 8 years of operation, Khat Vong currently has nearly 70 sponsors who accompany them and 80 students have "left the group" who are university students and go to work, with suitable careers. Vien Thuong, a girl with timid eyes, one day in Quang Xuong, Thanh Hoa became a second year student of the Diplomatic Academy. And the youngest sister named Thi in a family of 3 orphans has become much more courageous when receiving love and family atmosphere from other brothers and sisters in the shared house of Khat Vong.

Returning home after her first summer camp, an 11-year-old girl sent a text: "Teacher, I have never spoken to you. Since receiving your love, I have longed to call your voice. Please allow me this one time. Reading the message, Dung's tears fell. Since then, not only Thi but many other children in Khat Vong also called her with two hours: "Mother Dung".

Among the grown-up children from Khat Vong, Tran Viet Hoang, from Ha Tinh, a blind boy who passed Fulbright University made Dung feel even more proud.

Hoang has no father and mother is sick because he has to undergo dialysis for more than 20 years. Before knowing about Khat Vong, Hoang went to massage school, intending to graduate from high school, to practice raising a sick mother. In 2018, before graduating from grade 12, Ms. Dung encouraged Hoang to apply for Fulbright. With a guy with both eyes broken, Hoang thinks that international school is too much for him.

"Just give it up, I will accompany you", she encouraged and led Hoang to Fulbight. This mother often calls to encourage, free to go home to chat, orient the future for the boy. After Hoang graduated from high school, she took him to Hanoi to learn English. Not only that, she also sent a letter to the school to present the case of a visually impaired boy.

"I am writing this letter because I know you are an exceptionally humble, energetic person who does not want certain priorities for yourself. These are just stories I hear from loved ones. with all their love and admiration ... ", a part of the letter wrote.

In the letter, this mother told about Hoang's journey to overcome difficulties in studying and always achieved excellent achievements, about how he never gave up when going hiking with bright-eyed friends to reach the finish line .. . 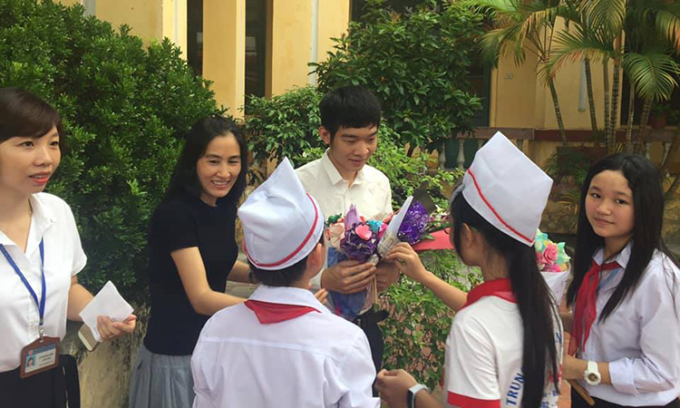 Ms. Vu Thi Dung with her friend Tran Viet Hoang during an inspirational talk at a high school in Hanoi in 2019. Photo: Character provided.

At 3:00 a.m. on March 2019, Hoang received a letter of admission with a financial support of VND2.2 billion for the four years of Fulbright's study. He waited until 4:00 in the morning to call: "Mom, I passed".

The results of the blind student create more hope for the children in Khat Vong. "I will overcome the barriers, I will try to be successful. I believe that. Thank you for giving me the opportunity to dream, to give me the opportunity to believe in myself," said an orphan Both parents wrote letters to Dung, sending their hopes in it.

After Hoang, another child of Khat Vong passed Fulbright with a financial support of 2.2 billion VND in the school year of 2020 and a full scholarship in Russia. From this achievement, Ms. Dung hopes that the orphans who receive pregnancy and care will fly higher and farther.

"Scent flowers fly by themselves, spread by itself and so does the spirit of Aspiration", the mother of nearly 300 children smiled happily.