Why do not need to wash poultry before cooking

Not only does washing raw meat not wash away bacteria, it also increases the risk of spreading it to other foods.

Most of the cooks are in the habit of washing chicken, duck ... before cooking them clean. However, this not only does not clean the meat, but also can cause bacteria to spread to other food causing poisoning, especially raw vegetables. 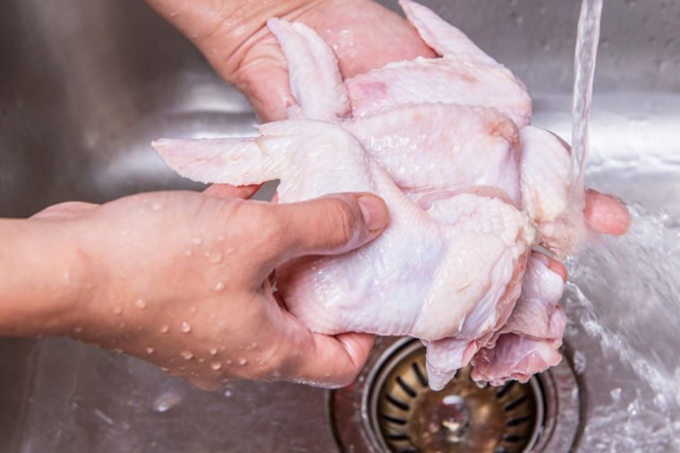 Why do not need to wash poultry before cooking
According to Reader's Digest, poultry meat is one of the foods that contain the most bacteria, especially the scientifically known type campylobacter - the main cause of about 280,000 food poisoning in the UK each year - often occurs. Much in chicken. It is worth mentioning that you certainly cannot remove bacteria in raw poultry meat with cold water alone. Therefore, experts in health and food safety argue that washing poultry meat before cooking is not necessary.

According to the UK National Health Authority, when washing meat with a tap, or placing meat in a water bath to wash it, you can hardly avoid the splashing of water that spreads bacteria to tools like sinks and dishes bowls and other food to close. In fact, no matter how much water you wash, it won't be able to remove bacteria from raw meat. In addition, the water on the meat increases the moisture content, facilitating the bacteria to grow faster, and at the same time, affects more or less the natural flavor of meat.

The only way to get rid of the bacteria in poultry meat is to cook them to the right temperature (minimum 165 degrees C). If you still want to keep this habit to be safe when eating, after washing, you should use a paper towel to dry the remaining water on the meat to remove excess moisture. In addition to having to wash your hands thoroughly after touching raw meat, you must spray disinfectant (with specialized cleaning water) the wash basin, the surrounding table ... At the same time keep cutting boards, meat wash aside avoid cross contamination.